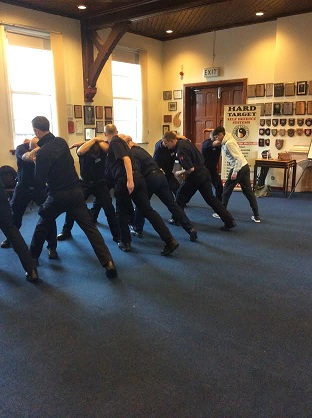 Blog
As part of my TY work experience, I experienced the work of those at Hard Target Self Defence and Focus Fitness. On Monday January 8th my week of work experience began. I accompanied Aidan and Albert to the training of the Dublin Fire Brigade at Marino. The two hour seminar covered break away techniques that could be used in various situations the workers at Dublin Fire Brigade may find themselves in. These situations included being struck at, being grabbed from in front or behind as well as how to defend from the ground after being pushed over. The techniques that were taught included crash-and-cover, windmills and most importantly the fence and verbal communication. I was lucky enough to be able to take part in the seminar with the members of the Fire Brigade and going into this seminar I did not know what to expect. I was fascinated by how easy but effective some techniques are to perform. I learned about the mental side of self-defence and was astounded by Aidan and Albert’s ability to explain techniques and answer questions when given some. It was a great experience and hugely beneficial to both the Dublin Fire Brigade and myself.

Also, as part of my work experience was experiencing personal training with Focus Fitness. I sat in on a session with Noelle on Tuesday. As I expected, the session began with a warm-up. However I was intrigued by Noelle’s approach to rotate between push and pull exercises during the session. These exercises included the chest press with dumbbells and pull ups. Another thing that was interesting was the use of band assisted and negative pull ups during the workout. The workout included step ups to work the muscles of the lower body and concluded with core work.
Another highlight of my work experience has been the box-it class. It was not what I expected at all. I expected the entire class to be an intense circuit workout, heavily focused on aimlessly striking pads and heavy bags. I was surprised that the class included a detailed breakdown of the axe kick to break down somebody’s guard before following up with a combination. The class then took on a more intense approach with ground work. Posting in side control and transitioning to full mount was the technique taught and this was the beginning of an intense second half of the class. It was followed up with a short ab workout that topped off a great workout. The class was fun and enjoyable. I would recommend it to anyone who wants to learn to defend themselves while getting a great workout at the same time.

During my time here I also sat in on a private lesson by Aidan. The lesson covered the defending of a headlock when taken to the ground. Aidan’s knowledge and detailed breakdown meant that the technique was understood and performed with small issues that were easily corrected. The lesson also included submissions that can be applied when the headlock is defended.
So far my experience has been brilliant. I have learned many things that I will take forward with me and have possibly found a career for the future.
I am looking forward to experiencing the KidzKombat self-defence classes with Albert and the next two days to come.

The KidzKombat self-defence taught by Albert was once again an enjoyable and eye-opening experience. To witness young children being able to defend themselves against a bully and eliminate the threat of an incident of bullying was an unusual sight but something that should be seen more often, as bullying is a growing issue. The second half of the KidzKombat was also very educational and taught through a fun fashion. As a participant in the classes I received the full experience of the classes and I am grateful for it. I learnt other techniques during the teen lessons and I was once again amazed at how skilled the participants were. I learned to defend against a haymaker and headlock as well as some basic techniques such as managing distance between you and the attacker. As a beginner I was made feel welcome and could pick up on things easily as the classes were well run and understandable.

The general self-defence class on Thursday night was also an incredible experience. As the participants were working towards their grades they worked on different techniques once they had warmed up though a clinch drill. I got to witness some people training punch block techniques and others training takedowns and sweeps from the collar and cuff clinch, which I was shown by Aidan. The second half of the class dealt with knife defence. This was very captivating. The situation presented was an attacker holding a knife to the right or left side of the victim’s throat. To defend, the victim controlled the knife while striking the attacker and sweeping them.

During other private lessons I was able to sit in on I learned some other techniques and was introduced to new terms such as ‘Neuro Linguistic Programming’. Other thought-provoking topics I was introduced through my experience at Hand Target was body language and some psychological aspects to self-defence.

I thoroughly enjoyed my week here and I am grateful for a chance to receive work experience at such an amazing workplace. It is safe to say Hand Target and FocusFitness is run by a friendly, close-knit team and I hope to return to Hard Target again in the future to train.