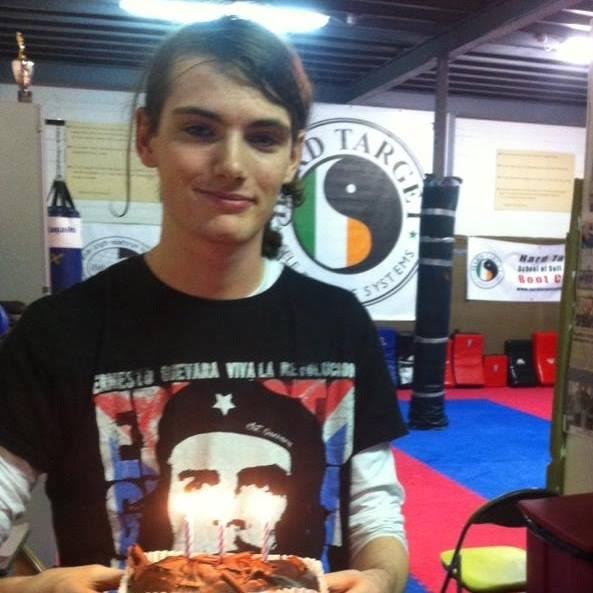 1. Age – 17
2. How long have you been training in Hard Target? Two and half years.
3. Current Grade? Green belt, 2nd blue tag.
4: Favourite Technique and why? Shoulder twist into a rear naked choke. It allows you to deescalate the situation without doing too much damage.
5. What you enjoy most about self defence training? Bettering yourself with each class.
6. Self Defence goals for the future ? To be able to protect myself and friends as best as I can.
7. Favourite movie – fight Club
8. Favourite food- anything with chicken.
9. Describe yourself in three words – hard working, quiet, determined.
10. Most memorable moment in HT? My first grading.
11. Favourite quote – don’t have one.
12. If stranded on a desert island who would you choose as a companion and why? My friend Cian Donlan as he is resourceful and probably tasty if I run low on food supplies.
13. If you could go back in time who would you like to meet and why? My great grandfather as he lived a very interesting life, being involved in the war for independence and the Olympics.
14. What type of animal would you be and why? Bird, I like to do my own thing and see new places.
15. How would explain your basic life philosophy? Take everything as it comes and don’t worry about the future.

My name is James Kirwan and I am a student in Hard Target School of self-defence. When I was fourteen, my life became very difficult. I started to spend days in bed, not eating and not talking to anyone. My parents decided to bring me to the doctor, and this lead to a period of six months where I was passed from doctor to doctor, all who had different opinions of what was wrong with me, and the general prognosis was that I was just having “teenage difficulties” and that I would get over them. I knew it was something more, and would go a long time before my problem was fully recognised.

In those six months of being passed around, I found Hard Target. My friend had gone to the Wednesday class, the teen’s class, and convinced me to come down to see how it was. I was thinking at the time that it sounded like fun and maybe I’d do it for a while before I moved on. From the first night I went down, I got much more than I bargained for.

The first thing I noticed about the place was how friendly the instructors were. Mary who was instructing us at the time, made sure to give time to everyone and by the end of the night I felt great. I’d learned a new way to protect myself and had found something I felt I was good at. I continued to attend and soon met Aiden and Albert, two lead instructors. For the next two years I would train with them.

While I attended Hard Target, I was in and out of school and having a lot of trouble with doctors. Six months after I’d been diagnosed, I was admitted to CAMHS, were someone actually recognised that I had a problem and began to help. Life didn’t get any easier however. As the years went on, I got a lot worse before I got better. Through these difficult times, I was put under suicide watch, and had to endure constant monitoring by my parents. I really felt there was no hope and wanted to quit almost everything.

I say almost because Hard Target was the one thing that always left me with a positive experience. Every Wednesday night, I got a two hour period where I forgot everything crappy in my life and learned new things about bettering myself. After each lesson I’d always come home feeling good about myself. I had complete trust in my instructors and training partners. I remember my first grading being one of the happiest moments I’ve had. We spent a month practicing a set of techniques, and then used them under pressure. We worked to exhaustion, each time we finished we’d start over. By the end everyone was shaking from adrenaline and worried about how they did.
At the award ceremony where we were given our belts, Aidan gave his feedback for everyone in the class. I felt elated and almost cried when I was given my grade. I had triple graded, from no belt to green belt. The feeling of comradery and happiness in the room was indescribable. I realised just how important Hard Target was to me.
From then on, I made a strong effort in my own therapy, and tried my hardest to apply what I learned in CAMHS and in Hard Target to my own life. The next year had its ups and downs, but eventually it worked. I can now look people in the eye and go about my life happily. As of September 2015, I have been discharged from CAMHS. Hard Target played a large role in helping me learn to cope with life and I continue to learn from new things every time I attend.